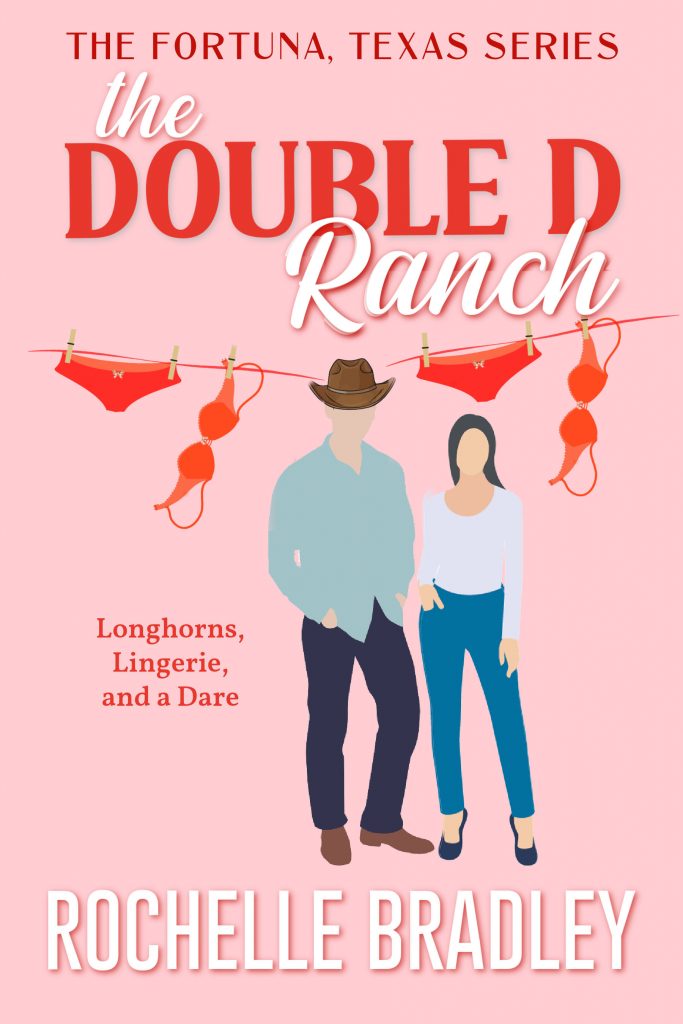 Welcome to Fortuna, Texas where the men read romance novels. This spicy, heartwarming, friends to lovers romance is set in the small town of Fortuna and is the first in the Fortuna, Texas series.

Much to the chagrin of foreman Josiah, Jessie Davidson wants a romance reduction. But the Double D Ranch hides a secret. Since inheriting the property, Jessie kept her grandmother’s hoard concealed, but now she’s found the courage to purge the unwanted items: steamy novels, thousands of them. Romance has to go! Donating the books is a good thing, right? Not when coupled with a dare.

The dare spirals out of control. The ante is upped when caches of the spicy books, left in barber shops, pool halls, and pubs, challenge others to join the fad. A perverted prankster runs amok playing on the town’s fantasies. Book clubs are formed. Plots acted out. In a town saturated with romance, Jessie finds her love life underdeveloped.

Keep Jessie safe. It’s the promise Josiah Barnes made to Jessie’s dying grandmother. He aims to honor it, even if it means protecting Jessie from himself. Failing her in the past has him on high alert when the Double D becomes ground zero for the arousal avalanche sweeping the town. As a full-support, silent partner, Josiah will do anything to augment the Double D. But when Jessie starts selling handmade lingerie, keeping his hands to himself is easier said than done…

Will she shelve happily ever after like a rejected novel, or open her heart and start a new chapter?

“You ready?” Jessie hesitated, embarrassed about the collection Grandma left. She led B.J. up the hardwood stairs to the second floor. The scent of his musky cologne preceded him.

“I doubt it.” Her hand gripped the metal doorknob. When she’d inherited the Double D Ranch from her grandparents, the cache in the upstairs bedroom came as a complete shock. She took a deep breath and closed her eyes, steeling herself for his reaction. The area behind the door once housed Grandma’s sewing room but now…

The mess was as awe-inspiring as it was overwhelming, which had been why she enlisted the help of the reluctantly altruistic B.J.

“Well?” he grunted, crossing his arms as he waited. A hard worker, the thirty-two-year-old man had caught her eye a year ago with a smile that lit his face. The smile disappeared, however, when his wife left him for another man. Now the handsome man scowled as a hobby.

Her hesitant fingers tightened around the smooth knob, slowly her wrist shifted, and the latch popped. The door opened a crack. “You ready?” she repeated, taking another deep breath.

He shifted his feet with impatience. “Already said I was.”

Words could do little to describe the mess or the enormity of it. It wasn’t the worst thing she’d ever encountered but Jessie found it embarrassing, nonetheless.

She could’ve had a cleaning party with her best friends, Kelly and Mona, but they’d heckle her to hell and back with what they’d find, plus the whole town would find out in no time. She didn’t want her grandma’s neurotic obsession, the Davidson version of the skeleton in the closet, to become known.

Then there was Josiah. He’d keep the secret. But being confined with the cowboy made it hard for Jessie to breathe. Her father trusted B.J. and laboring beside a stranger would be easier than dealing with the funny feelings bumping elbows with Josiah caused.

She swallowed then pushed the door open. The hinges creaked, filling the silence.

Books--thousands and thousands of paperback books, all romance novels--were stacked in neat rows from floor to ceiling. The bedroom was full save for a three by three space on the floor. It was a dark closet with book wallpaper. To say her grandmother had loved to read was an understatement.

B.J. pushed on the stacks a few times but nothing moved, it was solid. He whistled low.

The confounded man stood with hands on hips staring at the twelve-foot ceiling line. “How am I going to reach the top?”

“I planned ahead, knowing you weren’t ten feet high.” Jessie retrieved a four-foot step stool from behind the door. She unfolded it and he climbed up. In the hallway, a stack of plastic storage totes waited to be filled. She retrieved one and placed it next to the base of the ladder.

Many of the books had worn spines and dog-eared pages. Memories of Grandma flitted to mind. When Jessie was in elementary school she’d climbed into her grandma’s warm lap and asked, “Why do you read them?”

Grandma’s eyes had crinkled as she smiled. “Love, child. They are filled with love. Everyone wants to live happily ever after. Someday, Jessie, you’ll find it too.” She’d tweaked Jessie’s nose then tickled her.

“Hey, Jessie,” B.J. spoke, startling her. He glanced down from the ladder. “You’re gonna need more tubs. What the hell kind of books are these, anyway?” He stared at the cover of a scantily clad woman leaning against a bare chested man in leather pants. “Werewolves in Heat?”

“Grandma had a thing for romance novels.” Jessie shrugged, feeling her face heat.

“Honey, it was more than a thing. She hoarded the damn books.”

B.J. was right. One stack near the wall held one hundred and forty books. Some stacks had thinner books, equaling more

Jessie was grateful for the longhorn cattle ranch her grandparents left her, even if it hid her grandmother’s secret. Her grandparents each died within a year and her breath hitched thinking about them. Josiah had worked for her grandpa Don but stayed on as foreman when she inherited.

As if on cue, Josiah’s sun-kissed face peeked around the corner. The dusty tip of his boot and a stray piece of hay sent her mind reeling to the night he’d found her crying in the hayloft. The memory of his lips on her neck sent a shiver down her spine.

He pointed to B.J. who reached for more books, and mouthed, “You okay?”

Her heart tripped when she gazed into his curious eyes framed with a brow etched with concern. She gave a thumbs up then waved him off, slightly annoyed yet comforted he was checking on her.

Hold onto your hats!

The Double D Ranch is a rootin’ tootin’ good time, complete with hot cowboys, steamy romance, and double entendres that will have you “doubled” over with laughter. But don’t let the humor fool you. Double D is an entertaining romance with well-developed characters you can’t help but fall in love with, and a plot driven story that will have you turning the pages and leave you wanting more. Bradley has delivered a solid debut novel, one that has this reader anxiously awaiting the release of her next installment. Hold onto your hats, folks – it’s gonna be a helluva ride!

A Western Comedy that is totally unashamed of itself.

I’ll tell you straight away, I normally don’t go in for romance novels. However this book was not solicited to me cold, but rather it came to my notice as the work of an author in my area, Rochelle Bradley. She had the advantage of being able to talk her work up to me in person, and she managed to intrigue me with her lively characters, as well as their story and its prodigious puns.

Double D Ranch is absolutely cheeky and only takes itself seriously in the moments that call for it. It is a romantic comedy, but that phrase feels unfair, because it is now and perhaps forever a phrase attached to a particular type of formulaic, dry, utterly predictable movie and/or story that has become a cultural cliche. Reading Double D did not at all remind me of some of those horrid romcoms I’ve somehow endured in the past. This story feels fresh, it balances the comedy, romance, and sexual tension well, and it is thoroughly ingrained in its Western setting, Fortuna, Texas to be more specific. It’s a nice combination of elements that feels immersive, and despite some of the absurdities in the pages, it almost seems like a story this quirky and odd could really happen in a small Texas town.

There’s nothing I can fault in what I read without going into turbo nitpicking mode, and honestly that comes more down to personal style choices I would make as a writer versus what Rochelle did. The prose is tight and clear, the POV shifts are free of confusion, and the whole thing flows quite breezily. Besides, our differences as authors and as people are what make us interesting, and I’m glad she wrote this, because if I did it probably wouldn’t be as funny.

Again, I normally don’t read these kinds of stories much (if in the mood for romance or comedy there are usually some go-to films I put on instead) but my personal reading choices are not a reason to objectively dock any points from The Double D Ranch. The story is excellent, with great heart and fun characters, and considering that it had an uphill battle for my attention against my usual sci-fi indulgences, I hope that tells you something.

You can check out this book on Amazon at the link below, and if you do enjoy The Double D Ranch, there are two additional books by Rochelle in the Fortuna, Texas series for your consideration!

First off I want to thank this fantastic author for the chance to read and review her book. It was great getting to meet you and I hope to see you again in the future. Second, I have to say how amazing this book is. I loved the writing style and I laughed so hard reading this one. I started this book needing a pick me up and this was the perfect book to read. Don't get me wrong the story line/plot is perfection but the humor in this one made the story so much more.

The other thing that I really enjoyed about this book was that I had no clue what was about to happen. Have you ever found that one book that really held your attention and didn't let go mainly because you wasn't sure what was going to happen, yeah this is one of those times for me. I needed to know what was going to happen next. So much so that I held this book while I cooked at one point and almost dropped it into my sauce.

If you enjoy a great romantic comedy then this is the perfect book for you to read.

Saddle-Up, Pardner… This Little Filly Is Ready To Ride!

I have to admit, I was far from taking this novel seriously once I read the eye-rolling title of Bradley’s book, but I was pleasantly surprised by this great yarn about a small western town gone loco over a secret treasure trove of old romance novels. “Longhorns and lingerie” barely begins to describe this live-wire western romance with a twist of mystery and angst. And although it’s sexual innuendo that abounds between the pages of this astonishingly endearing read—with places like the Tease Me Salon, Nailed—the local hardware store, and the Twin Hills Country Club in Nockerville (the next town over from Fortuna—readers will be giggling with delight as ranch-owner, Jessie, and her head cow-poke, Josiah, set themselves on a mission to save the financially troubled Double D Ranch.

If you’re in the mood for some knee-slapping’, rip-roarin’, high-fallutin’, get-ready-to-kick-off-your-boots-and-dance action, saddle-up, Pardner… This little filly is ready to ride happily into the sunset!

Congratulations to the author on this award-winning story! This novel will be permanently featured on my website under IHIBRP 5 Star Recommended Reads!